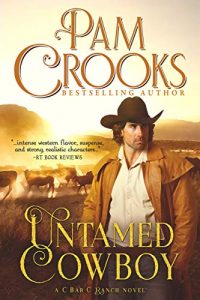 It didn’t matter he knew her barely a month. Nor did it have anything to do with the fact they both worked for the United States Treasury Department and were assigned to the same counterfeit ring case. She was smart and beautiful, loved adventure and danger and had an air of mystery about her which he found fascinating.

That’s why he’d asked her to marry him, he decided finally.

It was a matter of timing, too, he thought, settling back into the carriage seat leather on his way to the Brown Palace Hotel where she was staying. It was just the two of them in this part of the country. Neither knew a soul in the entire state of Colorado, let alone the city of Denver. She’d never been this far west before; he’d never been this far north.

Their work on the counterfeit case had thrown them together. Kept them that way. Inevitable the attraction between them would start to sizzle a little.

Make that a lot.

He was ready to get married, besides. Came a time when a beautiful woman got a man to thinking about settling down, and Abigail had done that for him. She’d been surprised at his proposal of marriage, but got over it fast enough. Once she’d agreed, it hadn’t taken long to make arrangements.

Penn’s plan was to escort her to the judge’s chambers for a quick ceremony. From there, they’d go back to the Brown and the honeymoon suite she’d reserved for them.

What would happen after that stirred up a slow fire deep in his groin. They wouldn’t have much romantic time to themselves until after they finished up their case, but he intended to give her a wedding night she’d remember forever.

The carriage pulled up in front of the hotel doors. He stepped out into the crisp January air, onto a sidewalk neatly swept clean of the morning’s snow. He handed up a bill to the driver. Far as he knew, Abigail had never been late a day in her life. It was one of the things he admired about her. Punctuality. But he was early, and he figured she wouldn’t be ready to leave just yet. He wanted to make sure the carriage was still waiting for them when she was.

He entered the Brown Palace’s lobby, his mind more on straightening his tie and adjusting the cuffs on each sleeve than the grandeur of the place. She had high tastes and that concerned him some, but they’d work through it. She knew as well as he did what a government agent’s salary entailed. They wouldn’t be able to afford to live like she was accustomed, and she had to know that, too.

But they had the rest of their lives to iron out the differences between them, minor that they were. Husbands through the ages did what they could to make their wives happy. Penn would try as hard as the best of them.

His heels clicked on the onyx floor as he headed toward the electric elevator. While he waited for the doors to open, he blew out a breath to quell the anticipation of his impending wedding and lifted his gaze. The place was unique in its triangular shape, eight-story high atrium, and tier after tier of ornate balconies.

Abigail had luxurious taste, for sure.

Her room was located on the fourth floor, and for the time it took the car to return to the ground level, Penn could’ve taken the stairs and been halfway there by now. He fought down his impatience and slid his gaze up the atrium. There he could see the elevator on the top level, and he tried to discern if there was a cause for the delay.

There was. Three men. And his blood turned cold.

They stepped out the car’s door and lingered at the balcony, as if to marvel at the expanse and beauty of the lobby below. Recognition hit Penn hard. Bill Brockway, a notorious counterfeiter recently released from a New York prison. With him, Nathan Foster and Rogan Webb, his accomplices. All of them members of a slick and very elusive ring of thieves.

He’d studied the set of photographs sent to him by the Secret Service often enough this past month to have no doubt of their identity. They’d swindled hundreds of thousands of dollars from banks scattered throughout the eastern part of the country with bogus notes they’d expertly forged and distributed.

They had to be stopped. The money they’d stolen returned. The tools of their trade destroyed.

His impending marriage warred with the need to capture them. When another elevator came down and its door whooshed open, the marriage part lost.

He bolted inside. He’d worked too long and hard to lose them now. Abigail had as well, and Penn levered the elevator doors closed himself, before the attendant had a chance.

“But, sir.” Clearly taken aback, the bellman glanced at the startled guests prepared to exit before Penn denied them the chance. “There are others who must get off on this level.”

“They can do it later. Let’s go.” He lifted his arm and pulled the cable that would take the car up again. “What’s on the eighth floor besides the ballroom?”

The car began to lift, gather speed toward the second floor, then the third.

“The Men’s Club Room,” the attendant said, eying him with uncertainty. “And the Ladies Club, too.”

He hoped the lounging places weren’t busy this time of day. Things could turn ugly in the next few minutes if they were.

The fourth floor passed by, and with it the opportunity to reach Abigail, but there was no time to rush to her room, to inform her of his discovery. She was his partner and entitled, but she’d just have to accept his decision to attempt an arrest without her.

They headed toward the fifth floor, the sixth. The adrenalin simmered in his veins. By the time they finally reached the uppermost level, Penn was all but shaking from it.

The car stopped, the door barely open before he angled his body through and burst into the carpeted hall. His gaze shot along the balcony and found the trio sauntering toward the Club Room, talking quietly amongst themselves, again in no hurry. Penn would’ve given his right arm to be carrying a weapon.

How he would manage to bring in three men by himself he had no idea, but circumstances were he had to give it a try. He sprinted toward them. “Excuse me, Gentlemen. May I speak with you a moment?”

Their conversation halted. In unison, they turned toward him. Brockway, in his fifties, sporting a moustache and beard, narrowed an eye. In light of his experience and lengthier arrest record, he fit the role as leader of the group.

“That would depend, I suppose, wouldn’t it?” he said and smiled.

Penn wasn’t fooled by his demeanor. The man was smooth. Wouldn’t be long, he’d be desperate. He’d know an arrest would keep him behind bars the rest of his life.

And if he didn’t suspect Penn was a government agent, he would soon enough. Penn kept his features impassive, his manner polite. The last thing he needed was to have the men bolt in three different directions. What would he do then?

He paused in front of them, acutely aware of their uneasy scrutiny. Nathan Foster, small-boned and looking nervous, remained silent. But it was Rogan Webb who studied him with outright boldness, as if the man tried to delve right into Penn’s brain to determine his motive.

Handsome and dressed in a smart black suit with crisp white shirt, he looked like a walking bankroll. Wasn’t hard to guess it’d been counterfeit money that helped him look that way, and Penn’s resolve strengthened.

“We haven’t.” Penn indicated the nearest door, the entrance to the Men’s Club Room. “Introductions are in order. Let’s go inside, shall we?”

The men didn’t move, as if they knew that despite the privacy the room offered, it’d have only one means of escape.

Penn knew it, too. He had to get them inside. Fast. He had to find some way to get word to Abigail, and round up a little muscle from the police besides.

“Gentlemen,” he said, waiting, his heart pounding, his arm extended toward the closed Club Room door.

But it wasn’t a man who stood in the portal. Instead, a woman did, and she wasn’t wearing her wedding dress like she should’ve been, and why was she here on the eighth floor coming out of the Men’s Club Room when she should’ve been in her own room, four levels lower?

Rogan whipped out a pistol from an inside pocket of his jacket and pointed it at her bosom. “I never expected you to double-cross us, but it seems I was wrong, my dear Abigail.”

. . . too stunned to react to the weapon Bill Brockway suddenly produced and leveled right at him.

Seeing it, Abigail’s attention jerked toward Penn. For a moment, the barest of moments, something that looked like guilt flashed across her features.

His brain began to function, bit by bit. The realization that Rogan knew her, had called her by name, most of all.

“Penn!” She stepped toward him, looking beautiful and frantic all at once. “Thank God you’re here! We must act quickly–”

“Damn you!” Rogan snarled. A gunshot ripped through her, and she spun from the force. Her blood splattered onto the wall, the Club Room door, the thick floral carpet cushioning her fall.

She lay motionless. White-hot rage erupted inside Penn, and he flung himself at Rogan. The tackle knocked the revolver from the man’s hand, and Penn scrambled to retrieve it, the need to kill as strong as his need for justice, his fury blinding all reason.

He held his weapon in both hands and aimed it straight at Penn. With cold, methodical intent, Penn twisted, lifted Rogan’s revolver and pulled the trigger.

Nathan Foster whirled and broke into a run. Penn shot him, too, and he landed spread-eagled on the rug.

A small sound from behind stopped him. A moan. Abigail’s. Stunned that she wasn’t dead, gripped by wild hope that she’d survive, that things would be right between them again, he swung toward her.

Rogan Webb took advantage and lunged toward the stairwell. A coward’s escape, but Penn didn’t care. Not anymore.

He crawled toward Abigail and slid his arm beneath her shoulders. Every breath rattled, her face was chalk white, and God, there was so much blood. He eased her up, as carefully as he dared, to help her breathe.

“I’ll get a doctor,” he said. But he didn’t call for one. Her gaze, often seductive, always intelligent, but now fading from life, clung to his.

“You never knew, did you?” she whispered.

A heavy dread filled him at what she implied, the truth he didn’t want to hear. “Don’t talk, honey. Don’t do anything. Save your strength.”

Yet, slowly, her hand lifted. Touched his cheek with fingers smeared crimson. “I tried to . . . love you. You have to know I tried.”

The words slashed through him, left him staggered from hurt. From her betrayal.

Then, her eyes closed, her head lolled, and he lost her forever.