Eleanora Cavender couldn’t hear the preacher’s voice from where she stood in the back of the mourning crowd. It didn’t matter what the man said, 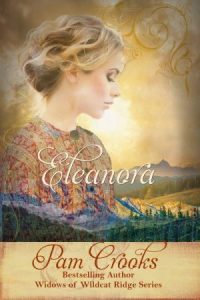 anyway. Prayers didn’t change a thing. His words, though lifted to the heavens and the Almighty, would do nothing to bring back the 175 miners killed at that awful Gold King Mine.

Including her husband. Darvin had died instantly, they said, just like all the other men had, none of whom were given the chance to tell their wives and children good-bye. No opportunity to settle their affairs. No possibility to change their circumstances and prevent what happened.

Tears prickled her eyes. At least Darvin hadn’t suffered. In that, she found comfort. He wasn’t a particularly loving husband, or a passionate one, but he had big dreams, and he worked hard. It wasn’t his fault bad luck was always on his trail.

But then, who was she to point fingers?  No one had worse luck than she did.

“Mama, I’m cold.” Tessa pulled on her arm, again and again. Eleanora had been so caught up in her morose thoughts she hadn’t realized her child had been trying to get her attention. “When can we go home?  I’m tired.”

Eleanora buried her self-pity. There’d be time enough in the coming days and weeks to wallow in it, but now she had her daughter to think of. A three-year-old didn’t understand what happened or why they were here, even though Eleanora had gently explained to Tessa her papa had died and was never coming home again. Eleanora had drawn the line at explaining Darvin’s body was buried with scores of other men­at least, what was left of their bodies­in caskets crammed side-by-side inside a big hole. Nor did she explain how he wouldn’t have his own burial service or even a gravestone and likely never would, and that’s why they were here on such a chilly day with practically the entire population of Wildcat Ridge.

Few that were left.

Blinking against a new sting of tears, she lifted the collar of Tessa’s coat more snugly around her little neck. “What happened to your scarf?”

Eleanora sighed. Spring in the Uinta Mountains carried a bite that reminded everyone winter wasn’t far gone. The lengthening days promised summer was coming, however, and her favorite season promised hope. God knew she could use some.

She pulled off her own scarf and wrapped it around Tessa’s collar twice before tying the ends into a knot that wouldn’t come undone. Eleanora could ill afford losing the one scarf she owned.

“Warmer, my sweet girl?” She tugged the miniature blue hat she’d knitted last Christmas lower over Tessa’s ears, too, all but covering the blond hair so much like her own.

Tessa nodded, paying no mind to Eleanora’s fussing and appearing more interested in their horse and wagon parked along the road. “Can we go now?”

“Let’s. I think the preacher is almost done.” She lifted her daughter up, hugging her close to keep her warm.

The service showed no sign of winding down, but Eleanora had had enough, too. Standing at the back of the crowd enabled her to leave without drawing attention to herself.

Tessa hooked her arm around Eleanora’s shoulder. “Can we stop at the bakery and get a donut, Mama?”

“Hmm. I’m not sure they’ll be open, Tessa. Most everybody in town came out here to listen to the preacher say his prayers.”

“But Mama, I’m so, so hungry. A donut will make me not be hungry anymore.”

“Is that what Papa used to tell you?” she asked, knowing he did.

“Well, too many donuts aren’t good for a little girl’s tummy, you know.” Of course, Darvin didn’t buy Tessa that many treats at the Sugar and Spice Bakery. Not only could they barely afford it, he hadn’t been home enough to run errands in town, a task which usually fell to Eleanora. On those rare occasions when he did, however, Tessa always got her donut, and didn’t a child remember those things?

How could Eleanora refuse her on the day they laid her papa to rest?

Their buckboard appeared in view, lined up with scores of other rigs parked alongside the narrow road. Eleanora halted and set Tessa down, then took her hand. Goodness, the child was getting too heavy to carry these days, especially over uneven ground.

She straightened, her gaze caught on movement a short distance off to her side. Someone had separated from the crowd and strode toward her with such purpose, Eleanora’s stare lingered. The moment her vision identified a plaid suit, a cane and muttonchop whiskers beneath a fashionable, no-doubt-expensive-bowler, recognition hit hard.

Her shoulders squared. Mortimer Crane was the last person she wanted to see, and today of all days.

She tugged Tessa’s hand and lengthened her stride, forcing the child to practically trot beside her to keep up. Eleanora couldn’t get to the wagon fast enough.

“All right, sweetie. A donut for you, but only if the bakery is open. Which it might not be, remember? Mama will drive by and see if it is, though, just for you.”

She was rambling and talking fast, but Tessa didn’t seem to notice. Eleanora swung her up into the driver’s seat, and her daughter scurried to the other side, clapping her hands. “Thank you, Mama!”

Eleanora’s eyes closed. Dare she ignore him? The man owned most of the town. He owned the Gold King Mine, too, and as far as she was concerned, it was his fault there were two explosions and so many men died. If he’d taken better precautions to protect the miners, there might not have been such a horrific disaster, and she blamed him for her loss, just like every widow in Wildcat Ridge did.

Unfortunately, she couldn’t ignore him, but she didn’t have to talk to him, either. She couldn’t imagine what he’d want with her, and whatever it was shouldn’t take long.

“Might I have a word with you?” He halted in front of her, all five-foot-six-inches of him, his height a match to hers. And those blue eyes, boring into her, like he’d drill her into little pieces, gobble her up and spit her out.

“I’m afraid my daughter is cold,” she said in a stiff tone. “I intend to get her out of this godforsaken cemetery for a place much warmer and infinitely more pleasant. If you’ll excuse me.”

She pivoted, but his pale hand clasped her elbow, pulling her back to face him.

“I will not excuse you,” he said in a tone smooth as ice.

Eleanora sucked in a breath. The man was positively wretched. He ruled over Wildcat Ridge like a tyrant, without a kind word to anyone. Ever. Now, he clearly intended to have his way, like he always did, without a care that Eleanora had been thrust into widowhood with great prematurity or that Tessa was close enough to overhear.

“Fine.” Eleanora strode farther down the road, away from the wagon where she could keep a close eye on her daughter. “Please speak quickly. I have matters to attend to.”

He withdrew a fat cigar from inside his coat pocket. “Were you aware your husband,”­he inclined his head mockingly­“may he rest in peace, owes me a debt? Quite a large one, I might add.”

Whatever Eleanora had expected him to say, it wasn’t this.

“Debt? I most certainly was not aware. Has he borrowed from you?” Her mind raced to find a shred of truth in the accusation but failed. Darvin made a decent wage as a miner. They weren’t wealthy, but a life of strict frugality left them with money enough for food and supplies when they needed them. Why would he borrow from the mine’s owner? “If so, he would’ve told me.”

“Borrowed is not the word I would use, my dear Mrs. Cavender.” A match appeared from inside his pocket, too. “‘Stolen’ would be much more accurate.”

“Why would I? My information is credible.”

“From whom?” Her heart pounded, like the questions demanding answers in her head. “Who told you my husband stole? Even if he had, what could he possibly have taken from you­and why would he, besides?”

“I pay my man well to provide information to me, and he would not dare inform me wrongly.” His eyes narrowed. “Since you asked, Mrs. Cavender, gold nuggets. The ‘why’ part of your question is obvious, isn’t it? The gold is worth a goodly sum, and now, in his untimely passing, your husband’s obligation to repay me falls to you.”

The words circled in her head, chilling her skin in a way that had nothing to do with the cool, mountain air. “That’s ridiculous.”

Wasn’t it? Mortimer Crane would have no right to force her to pay him back. Even if he did, she had little money, not nearly enough to reimburse a goodly sum of gold.

“Should you refuse to honor your husband’s obligation, let me warn you I will personally see to it that your possessions, what few you have, are confiscated. In addition, all funds withdrawn from your account at the bank will be transferred to me.”

She nearly choked. “You can’t do that!”

“I do believe I can. I’m the owner of Crane Bank, am I not?” He flicked the end of the match with his thumbnail, and a flame flared. “You will be thrown into the street, a destitute woman with a child to raise.” He touched the flame to the end of the cigar, puffed and blew out a plume of smelly blue smoke. He smiled, without mercy. “Is that what you want, Mrs. Cavender?”

She swayed. Her lungs strained to pull in air, but failed, leaving her numb, unable to think, let alone speak.

He knew where to strike, to make her bleed the most.

Tessa. Her precious daughter. Her reason to live.

“I didn’t think so,” he said. “It’s good that you’re a reasonable woman. Meet me at the Crane Hotel at 8:00 sharp tomorrow morning. At that point in time, repayment of your husband’s debt will begin.”